This weekend, college kids across the nation spent their weekend partying, drinking, sleeping, relaxing, and probably making a lot of bad decisions. While I’m not saying Penn Stater never do those things, they had better plans for this weekend. 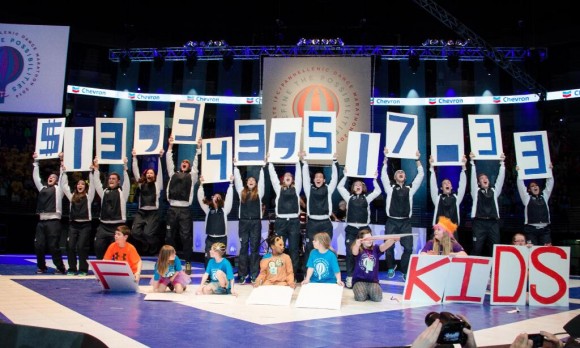 For 46 hours, more than 700 Penn State students stood in the Bryce Jordan Center in an effort to raise money for pediatric cancer through an organization called THON.

The picture above is the total amount that was raised by THON, the largest student-run philanthropy in the world, a total that goes up by roughly a million dollars each year.

The $13.3 million dollars raised is going directly the the Four Diamonds Fund at the Hershey Medical Center.

This one weekend will change the lives of many young people battling cancer by paying for treatment, providing support, and showing the kids and their families the best weekend of their lives …

and it’s all a possible because of the 15,000 Penn State student volunteers.

I have no words for how I’m feeling other than an overwhelming sense of pride.

I have never been more proud to call Penn State my alma mater.

WE ARE PENN STATE.

If you’d like to learn more about THON and it’s efforts, please visit thon.org

There is also a documentary that I’ve included below called “Why We Dance: The Story of THON” that can help you understand the inner workings of the largest student run philanthropy in the world.